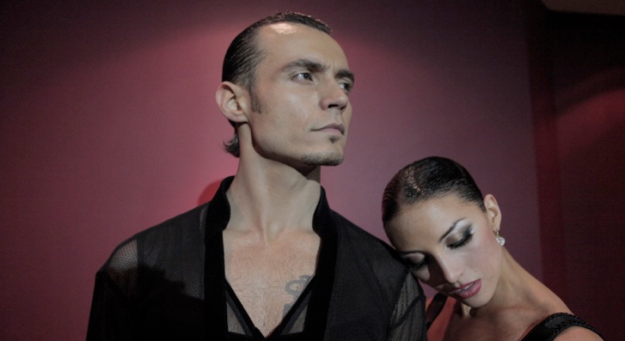 You may have never seen ballroom dancing in person, but you’ve probably seen Strictly Come Dancing (or Dancing with the Stars, if you’re in the US) and noticed that it’s actually really difficult. In addition to remembering all the steps, you’ve got to be fit, you’ve got to make it look meaningful, and you’ve got to trust your dancing partner. Ballroom Dancer is a documentary about a professional duo, Slavik Kryklyvyy (go on, say it) and Anna Melnikova, struggling with all the aforementioned things, under enormous pressure – they’ve just gotten romantically involved with each other, and this is Slavik’s last chance at a comeback after ten years out of contention.

Slavik reminds me of Zlatan Ibrahimovic, the Swedish footballer – yes, they’re both of Eastern European descent and happen to wear their long dark hair slicked back into a knot, but they both have an intense, virtuosic charisma about them, possibly informed by their martial arts training. Slavik lives and breathes dance, an exacting perfectionist about his craft; but at 34, he’s intent on proving that he’s not past his prime. Anna is younger and certainly in her prime, as the current amateur Latin champion; she’s formidable yet vulnerable, and struggles to cope with Slavik’s anxieties and dominance of their relationship.

Their romantic and professional partnership is the centre of the film, slanted towards the perspective of Slavik. We often see the two in their hotel room hanging out in addition to seeing them during rehearsals and competitions, so we can observe their chemistry and communication candidly, on and off the dance floor. We come to know their individual personalities through observing their separate physical and mental preparations for competitions; Slavik pushes himself to breaking point, while Anna seems to be more circumspect. Their egos clash constantly, and we see them striving to negotiate between their individual needs and the needs of their partnership. Anna exasperatingly comments during one argument that if you don’t want to deal with partners or emotion, ballet rather than Latin would be a better fit.

The film is an intimate portrait of the couple, going far beyond the usual fly-on-the-wall perspective of documentaries to construct a character-driven narrative. We’ve got Big Brother-like access to their lives, augmented by the candid reflections shared with their coaches and trainers (so there’s no need for anyone to speak directly to camera). The Danish directors, Andreas Koefoed and Christian Bonke, say the film was ‘shot as cinema verite but [was] edited like fiction’ and indeed, while watching Ballroom Dancer, it’s almost surreal to think that there was no script, that these are real people and this actually happened between them. It doesn’t hurt that they’re both attractive and emotive, like hired actors, but it’s the authenticity of their story that’s so compelling – this isn’t light, Dirty Dancing-like fare. Ballroom Dancer’s brutally honest depiction of a couple’s struggles is refreshing to see onscreen, whether you like ballroom dancing or not.

Ballroom Dancer is out in selected cinemas now. Contributor Cathy Landicho can be followed on Twitter @ConfusedAmateur.