The New York Film Festival is currently on, but the week before it opened, the New York Philharmonic opened its season with its first ever Film Week: The Art of the Score, featuring the sights and sounds of Alfred Hitchcock and Stanley Kubrick. As an avid fan of both film and classical music, this seemed too unique an opportunity to miss. The Hitchcock program was a montage of selections, while the Kubrick option was a full-length screening of 2001: A Space Odyssey with a live score. I opted for the latter. 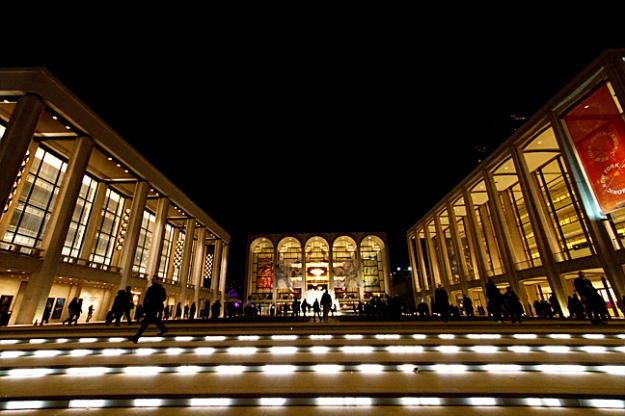 The Lincoln Center complex was abuzz with activity before the 8pm curtain. The crowd was younger than usual for this event, as you’d imagine. There were far more young couples, students and families, many likely visiting the venue for the first time. The Saturday night screening of 2001 was filled to capacity in Avery Fisher Hall (at right), the largest of the concert halls which seats about 2700 in four tiers. I’ve been to packed classical concerts in huge venues before – a sold-out Prom at Royal Albert Hall would seat 5000+ people – but I’d never seen a film with this many people before. The closest by comparison would be a packed screening in Screen 1 of the Leicester Square Empire, which seats about half of Avery Fisher Hall’s capacity.

As you took your seat, you couldn’t help but notice the 10+digit counter next to the conductor’s stand and imagine the recording of a score, and how the orchestra had to transplant the experience from the studio to the concert hall. Taking it all in, I thought of how bands like Radiohead have to practice and adapt their complex studio recordings for live stadium shows. Another noticeable difference from your average classical concert were the choir members visible in the front two balcony boxes with individual lights and hanging mics, rather than standing behind the orchestra. This enterprise involved more stagecraft than I had anticipated.

Before the screening began, Alan Gilbert, the Music Director of the NY Philharmonic for the past four years, led the orchestra in the film’s overture, Ligeti’s Atmospheres for Large Orchestra (1961). The ambient, spooky piece with no discernible time signature or melody established an anxious tone to frame the film, with its swelling discordant pulses overlaid with screeching strings. After a tense ten minutes, the lights came down and we all held our breaths awaiting the sun’s appearance. The wall of sound that hit me from the orchestra performing ‘Also Sprach Zarathustra’ by Strauss at full volume combined with Kubrick’s simple, dramatic images, plus the sight of the orchestra’s exertions was goosebump-inducing, a visceral high; the audience spontaneously burst into applause afterward.

Viewing the film with such a huge crowd together with the live score patently heightened the experience, making it both more immediate and more communal. I first saw 2001 in NFT1 at the BFI, and I don’t recall hearing audible laughter at HAL’s snarkiness or collective gasps when HAL reads Bowman’s and Poole’s lips while they are conspiring in the pod at the end of the first half. Moreover, the venue inspires reverence – this is a place where there are free cough drops in the restrooms to encourage absolute silence. The majesty of Kubrick’s images were well-suited for this high-art venue.

The late Roger Ebert observed: “When classical music is associated with popular entertainment, the result is usually to trivialize it (who can listen to the William Tell Overture without thinking of the Lone Ranger?). Kubrick’s film is almost unique in enhancing the music by its association with his images.” Some may prefer to imagine a late 19th century Viennese ballroom while listening to Strauss’ Blue Danube Waltz rather than Kubrick’s space ballet. But Ebert’s observation is easily accepted in the case of Ligeti’s music. In addition to the aforementioned overture, his Requiem and Lux Aeterna were used as the theme of the monolith. (Kubrick had actually commissioned a score from Alex North that he later substituted for Ligeti’s contemporary pieces, without the knowledge or permission of either composer.) The Musica Sacra choir performed Ligeti’s pieces admirably under vulnerable circumstances – the vocal parts are cluster chords, which are extremely difficult to pitch. There was an extra level of surreal-ness, seeing forty-odd people coordinating to give voice to Kubrick’s monolith.

I was initially a bit worried that the orchestra would not play enough during the film for me to justify buying the ticket. But I needn’t have worried – several of the classical pieces did repeat throughout the film, and even the silence was heightened in Avery Fisher Hall, particularly during the scenes when all you can hear is the astronauts’ laboured breathing while HAL conspires against them. There was definitely added value beyond the live music; seeing 2001 with so many people in a beautiful venue with amazing acoustics was well-worth the price.

However, watching the end credits while listening to a live orchestra was truly odd. The audience understandably applauded the end of the film while the orchestra continued playing the Blue Danube Waltz on a loop. But since the house lights stayed off, there was a palpable awkwardness in the audience about having to sit quietly and wait for the orchestra to finish when so many of us are accustomed to leaving during the end credits; Strauss’ waltz did not feel worthy of our attention without Kubrick’s visuals. To Alan Gilbert’s credit, he attempted to fill the vacuum by conducting with added vigour; but he had to compete for the attention of the film buffs in the audience, who applauded when particular names appeared in the credits, hooting while our focus was meant to shift to the orchestra.

Despite this rather anti-climactic ending to the screening, it was certainly a worthwhile experience. Personally, I hope that Film Week at the NY Philharmonic becomes a traditional part of the season – I’m imagining screenings of Taxi Driver or Do The Right Thing with live scores…

If you have any suggestions of other films that would benefit from live scoring, I’d love to see them in the comments.