Though I am a proud supporter, defender and member of the geek club, I have never been to a convention. And this – The Twin Peaks UK Festival 2011 at Hammersmith’s Riverside Studios – may be the nearest I ever get to the dizzy heights of show fandom. It turns out Peaks freaks – the nickname given to fans of David Lynch’s cult TV series – are wonderful people. Not only are they (or should I say we?) friendly and approachable, they are more than willing to dress up. And thank heavens for that, as Dad and I have done just that. My father, who in the daytime is a (mostly) serious and respected academic, has grown a thick greying mullet for the occasion, donned a garishly vile Hawaiian shirt and some psychedelic braces, and is instantly transformed into Laura Palmer’s psychotic psychiatrist Dr. Jacoby. I arrive much tamer, and have opted for white tights, red velvet, lipstick and black and white brogues, with the appropriate beauty spot, to go as serial seductress Audrey Horne. Walking round the rather Lynchean maze that makes up the journey to Riverside Studios, we start to get nervous – what if no-one’s dressed up? What if somebody recognises me?

Our fears are instantly allayed as, walking into the foyer, we spot two couples in matching outfits: the men dressed as Special Agent Cooper in impeccable suits and slicked back hair, and the girls in mint green Twin Peaks waitress outfits. We breathe a sigh of relief, and so it begins. 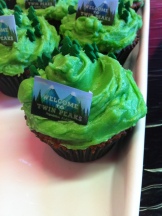 To enjoy the Twin Peaks festival experience, you really do need to be a fan of the show. That’s not to say you need to have watched all of the episodes, but you’ll require a more than lukewarm interest in it to get you through fourteen hours of Lynchean obsession. You read correctly – fourteen hours of screenings, interviews with stars of the show, and burlesque performances from the David Lynch-themed cabaret group The Double R Club that make up the day’s festivities. A diner decked out like the Red Room provides the audiences with Lynch’s brand of coffee, unlimited free doughnuts and cherry pie, and a variety of American diner-inspired snacks, including Twin Peaks cupcakes with Laura Palmer’s dead face drowning in blue icing made to look like waves!

Burlesque performances by the Double R club break up the day’s events. Highlights include a superbly surreal Lady With the Log striptease (think double entendres on getting wood, and the log as a boob-jiggling prop), a Special Agent Cooper look-a-like strumming ‘Halleluyah’ on the ukulele, a fire-eating long-haired Bob look-alike, and wonderful compering from a gentleman with black and white face paint who alternates between delivering Lynch-inspired performance poetry to strobe light dancing and outré introductions.

Two stars from the show – Al Strobel who plays the One Armed Man, and Kimmy Robertson who plays kooky secretary Lucy – are interviewed by Time Out film journalist Tom Huddleston. Both actors are charming, and fill the Q&A session with hilarious in-jokes and titbits from the set. Apparently, Kimmy kissed David Lynch “French style”, and he likes to drink red wine at parties. She’s also kissed Elton John and John Belushi: “It’s a hobby”, she states.

As the day comes to a rather exhausting close, I mull over what I’ve achieved essentially sat on my ass in a cinema. I met The One Armed Man! He complemented my dad’s parenting skills! I ate loads of doughnuts and cherry pie! I tripped out on Lynch coffee while watching Japanese animated video art played along to a single from the Lynch’s debut album ‘Crazy Clown Time‘!  I freaked out when I thought I saw my ex-boyfriend in the foyer of the Riverside Studios! I don’t know what David Lynch puts in his coffee but after three cups and fourteen hours of wonderful festival madness, I have absolutely lost my mind, in the best possible way. Rest assured, it’s what David would have wanted.