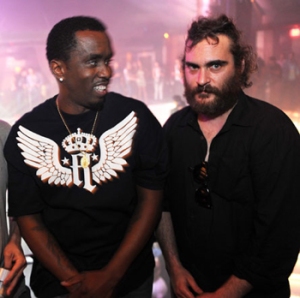 Now confirmed as a hoax by its director (the slippery, elusive actor Casey Affleck),  I’m Still Here remains a genuinely strange, subversive piece of work and is perhaps even less dechiperable in the light of this revelation. A verite-style documentary charting the apparent drug-fuelled mental breakdown of the talented actor Joaquin Phoenix and his farcical attempts to launch a rap career, I’m Still Here poses a number of tantalising questions.  Was Phoenix’s career worth putting on hold for almost two years for this art-prank? What will the rest of Hollywood make of this rather cruel deconstruction of its mores and foibles? Who was in on this freakshow?

As to what was real and what was faked, we’ll probably never know. Affleck tells us that David Letterman (always odious to me – check out his dismal patronising of the late Harvey Pekar of American Splendor fame on his show) wasn’t in on the joke when interviewing the actor on his promotional junket for the film Two Lovers. When Phoenix’s long-suffering assistant Antony shits on his boss’s sleeping torso in crude night-vision, however, we can only hope there was Nutella involved. Likewise, P. Diddy, often derided as an egotistical berk, appears genuinely concerned by Phoenix’s well-being after a particularly excruciating listening session. Later, a climactic vomit marathon that easily matches that of Gary’s in Team America: World Police, suggests that his rock and roll lifestyle and gargantuan intake of poisonous substances had some serious grounding in reality.

I’m Still Here is arguably the latest instalment in an ongoing theatre of modern cruelty that started (at a pinch) with Jeremy Beadle and has continued over the years with the likes of Chris Morris’ ‘Brass Eye’, Sacha Baron Cohen’s one-two punch of the popular Borat and the bleak, underrated Bruno and most recently Marc Wootton’s dastardly, uneven yet often screamingly funny ‘La La Land’ on BBC3. The common thread is the queasy line between inside and out, real and fake, targets deserving and undeserving; a sore point here soothed by Affleck’s recent admission.

After scenes of increasing debauchery, and just when we are prepared for I’m Still Here to tailspin into a final act of dissolution, it changes tack and Phoenix makes an attempt at a spiritual cleansing. In Panama, he wades into a river, and we flash back to the film’s opening video footage from 1981 of a young Phoenix diving into the very same river watched by his father. It feels tacked-on and almost pseudo-profound, yet is strangely moving, and the use of home video – the real within the fake – adds a layer of intrigue which recalls the likes of Capturing the Friedmans or Tarnation.

For a moment, the thud, mumble and catastrophe of the previous 100 minutes fades away and leaves us to reflect on a man who might, just might, be experiencing some kind of epiphany. After all, born with the unforgiving moniker Joaquin Rafael Bottom (later Leaf Phoenix) our subject led a peripatetic life as a youngster,  lost his brother to a speedball in unbearably public circumstances and, before finding fame as an intense and driven actor, had a spell in rehab following a period of serious alcohol abuse. This moment of peace is left open to mockery (i.e. “you’re a famous actor, get over yourself!”) but could really just be a man trying to tell us something from the heart; a chink of honesty shining through the jiggerypokery.

All that’s left to say is that if this is acting, then it is up there with some of the best acting I’ve ever seen. Phoenix is utterly convincing and at times mesmeric as a shambling, bloated version of himself. For now, he’s still here, but it will be very interesting to see where he goes next… The Oscars, perhaps? Credit must go to Affleck too, who directs with the same poker faced creepiness and distant control that permeates his best roles.