My heart always sinks slightly when I realise a film has been made by a debut writer-director. In most cases these hyphenates are very capable at punching out the words and are no slouch behind the camera, but combining the two disciplines for the first time usually leads to a worrying lack of distance from their material, and an inability to know what works well and what doesn’t. This usually becomes most apparent in the last 20 minutes of the film when the viewer’s buttock muscles determine that a more objective eye would have pruned away some of the stuff that the cutting-room floor was crying out for.

Patrick Stettner proves a very welcome exception to the rule. The Business of Strangers is an assured and compelling piece of work that weighs in at a nicely lean 84 minutes. Despite being nominated for the Grand Jury Prize at Sundance and winning Stockard Channing the London Critics’ Circle award for Best Actress, it made little impact at the box-office and failed to lead on to greater things for Stettner, whose only subsequent bash at direction was the distinctly underwhelming The Night Listener. But let’s not hold that against him. The Business of Strangers is just as perceptive as Neil LaBute’s In the Company of Men (another writer/director’s debut that explored power games in the workplace with a sexual twist) but without the characteristically bitter aftertaste of the LaBute recipe.

As brilliant as she is, Stockard Channing’s award (and nominations from other bodies) feels acutely unjust with respect to this film. It is the sparky interaction with the equally brilliant Julia Stiles that lingers long after the copyright information has disappeared off the top of the screen. Elsewhere on this blog, I have written about the ‘first female buddy movie’ in which the two actresses flounder in underwritten and over-directed material. The chief pleasure with The Business of Strangers is in watching two actresses at the top of their game, letting rip in roles that are perfectly in sync with their talents.

The opening scenes act like a dry run for Up in the Air. Stockard Channing plays Julie, a high-ranking, high maintenance businesswoman, inhabiting the same platinum air miles, executive hotel suite, hand-baggage-only milieu as George Clooney in the later film. She power-strides from airport to boardroom to hotel-room, wheeling her perfectly packed existence behind her, mobile phone clamped to her ear, the omnipresent muzak reverberating in her wake. Julie is a woman who has sacrificed much for her success: fearing for her job when one of her superiors calls an unexpected meeting, it is her therapist whom she phones for support. Learning instead that she is to be made CEO, her secretary is the only one she cares to share the good news with. 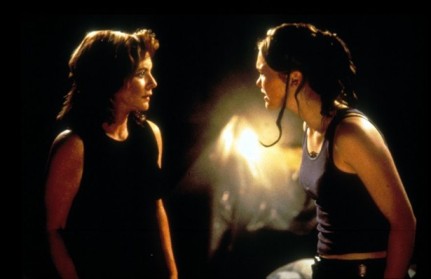 "Channing and Stiles are both superb, exuding intelligence and shouldering the film effortlessly between them"

Julia Stiles is Paula, a subordinate of Julie, but only in terms of job description. Her first encounter with Julie is brief: she is 45 minutes late for a meeting and, without being able to offer an explanation, summarily fired. Later, quietly basking in the glow of her promotion, Julie hears Paula yell a typically uncompromising “Fuck off!” at a man in her hotel bar. The dynamic of this second meeting is fascinating as the women jockey for the upper hand. When Julie attempts to apologise for the earlier firing without actually saying sorry and by offering a drink, Paula picks the most expensive cognac on the menu – ‘A double’ – shooting her superior the cockiest look in her repertoire. The woman she refers to as ‘überfrau’ is not to be allowed to diminish her again.

As the alcohol lubricates the friction between them, Paula admits that her real love is non-fiction writing: “The whole fiction thing is too neat – I like the sloppiness of real life.” Which is pretty much the feel of the evening that these two women spend together. Their relationship shifts constantly, with Paula an unpredictable catalyst. Sporting a spider tattoo in the nape of her neck, she gives the impression of spinning her own web, veering from arrogant to vulnerable via reckless and flirtatious. “You know a number of pornos are directed by women? They’re very similar but there’s less sex and more foreplay…”, challenging Julie with another of those meaningful looks. There is a palpable sexual undercurrent as they scandalise the occupants of a lift by joking about strap-ons and fool around in the hotel pool, but how seriously are we to take either of their intentions?

It would be unfair to reveal much more about plot, but suffice to say the dynamic changes markedly when a slick headhunting colleague of Julie’s oils his way into their company. There is a marvellous moment of transition when the women enter an area of the hotel under construction and are illuminated by a plane taking off from the nearby airport. Stettner uses slow motion and an ominous music cue to indicate that the larky power games are about to be played for higher stakes. And as scotches are downed, pills are popped and inhibitions are dulled, the boundaries that divide the poor girl made good and the slumming rich girl become increasingly indistinct.

Channing and Stiles are both superb, exuding intelligence and shouldering the film effortlessly between them. Hollywood should be ashamed that their talents have been so neglected. To watch Julia Stiles slump from her purple patch a decade ago to playing a barely-there character in the Bourne films and the lead in (shudder) The Omen remake is bitter proof that talent alone is not enough. And although I am aware that Stockard Channing has done something called The West Wing and won an award or two for it, what we really want to see is Rizzo clutching her Oscar, clad in Pink Lady jacket, cigarette dangling from lip – right?