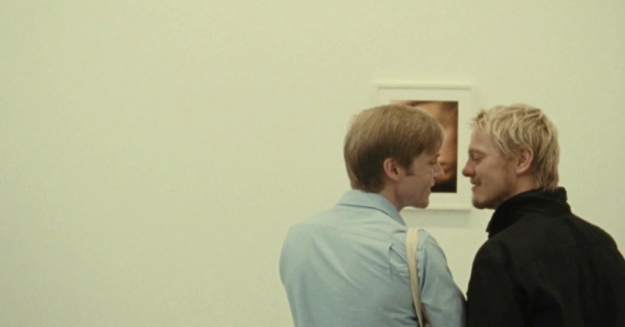 There seems to have been a developing trend in year-end film lists for the listmaker to casually drop a self-deprecating reference to the sheer arbitrariness of the task they’re engaging with. Well, I just enjoy making lists, and to paraphrase 90’s pop favourites The Cranberries, everybody else is doing it, so why can’t I? My ambitions for the list are fairly modest: that a) it might provoke a bit of discussion, and b) it might inspire people to go out and catch some good films they may have missed.

For consistency’s sake (and to couch the list in some kind of context), I’ve only selected films that were released in the UK in the calendar year 2012. This means there’s no place for some fare I greatly enjoyed at festivals, including Pablo Larraín’s astonishing docudrama No, Adam Leon’s sprightly New York fable Gimme The Loot, Ken Burns’ riveting documentary The Central Park Five, or Ashim Ahluwalia’s gloriously seedy Miss Lovely, all of which should (or definitely will, in No and Gimme The Loot’s cases) hit UK screens in 2013.

Here, then, is the Top 10, in alphabetical (not numerical: that taxonomic task was too tough) order.

Austrian director Haneke (who “took to Twitter” this year with hilarious results), produced two truly outstanding performances from Emmanuelle Riva and Jean-Louis Trintignant for this stately study of the devastating effects of dementia on an elderly, close-knit couple. It didn’t necessarily say anything overtly profound, but it was profoundly moving, not least because the two actors so fearlessly confronted issues that, owing to their advanced age, they would surely be dealing with when the cameras stopped rolling. Regardless of how Haneke’s exactitude made one feel on a moral level (Riva has a truly upsetting nude scene), it made for searing drama.

Petzold’s slow-burning drama about a nurse plotting her escape from banal early 80s East Germany was a fascinating, beautifully composed character study which had me hooked from minute one. In the title role, Nina Hoss was extraordinary. Her surface coldness was a vivid semi-subversion of the passion, fear and political courage that bubbled underneath. When her character eventually thawed, the monumental rush of relief and excitement I felt was testament to the poise and the sublime technical control of her performance. All that said, I also really enjoyed Andrew Tracy’s perceptive, skeptical review in the ever excellent Reverse Shot magazine.

My favourite doc of the year profiled the octogenarian, workaholic New York Times photographer in breezy, joyous style. Likeable, eccentric, talented and ultimately unknowable, Cunningham was the perfect subject. As I gushed at the time, “[BCNY is] not just enjoyable; it transcends documentary filmmaking to become a hymn to passionate, singular creativity.” I also said, “It’s aptly titled; encapsulating his world, a breathless rush where subject and location are inseparable, indivisible. Punctuation would just get in the way. It’s Bill’s city.” So there we go.

Like Barbara, Markovics’ initially austere (and very well-acted) directorial debut crept up on me, possessing an unexpected power. Focusing on the rehabilitation and subsequent growth into manhood of a 19-year-old offender, it was a real slow-burner about a tough subject that somehow managed to end up genuinely uplifting rather than depressing. Though such a comparison may seem a tad arbitrary, I much preferred it to the Dardennes’ The Kid With A Bike, which struck me as far more overdetermined, protracted and fantastical than many of its more effusive cheerleaders had suggested.

Moment for moment, Carax’s Holy Motors was the most fun I had in the cinema this year. Following a day in the life of mysterious everyman (and he really is every man) Mr. Oscar, played by chameleonic superstar Denis Lavant, it was an episodic, unpredictable and dazzling tragicomedy packed with bizarre jokes, berserk stylistic diversions, and myriad loving cinematic references. Above and beyond the craziness, the film hit me on a gut level. I saw a brave self-portrait of a filmmaker self-reflexively admitting the absolute folly of striving to present “reality” onscreen. And, most heartbreakingly of all, I saw, in Mr. Oscar, a deeply moving portrayal of the exhausting, crippling effect of the various roles which we (the human race – I’m aiming high here, folks) force ourselves to play, over and over again, on a daily basis. Oh man, and those chimps at the end: was there a more bittersweet moment at the movies this year?

No film swam around my head this year like Ira Sachs’ elliptical, New York-set drama. Focusing on a long, doomed relationship between a sensitive documentary filmmaker and a drug addicted lawyer, the semi-autobiographical KTLO was marked by fiercely unguarded performances, gorgeous cinematography by Thimios Bakatakis, and extensive use of the woozy music of late musician Arthur Russell. Not only that, with its plot thread about late queer artist Avery Willard (not to mention its championing of Russell), it actively looked to celebrate and excavate a particular section of American subcultural history. A deep, warm, discomfiting nightmare dream of a film.

Evil has a voice, and it sounds a lot like veteran director William Friedkin collaborating with playwright Tracy Letts for a second time. And guess what, evil’s a whole lot of fun too. This rollicking redneck neo-noir pushed the boundaries of taste (just ask Colonel Sanders), and provided Matthew McConaughey (an actor for whom I’ve never – Dazed and Confused aside – had much time for) with his greatest role to date. Rough, sexy and surprising, Killer Joe was the best thriller of the year. In the interests of full disclosure, I also got off on quite how much it seemed to piss people off, too.

Despite a marketing campaign which did its level best to make it as difficult as possible for the heterosexual male to walk up and buy a ticket, Magic Mike emerged as one of the most purely enjoyable films of the year. Expertly helmed by the redoubtable Steven Soderbergh, it was a hazily (and gloriously) shot Floridian tale which balanced a keen view of contemporary economics with a host of cutely quoted influences, from Paul Thomas Anderson’s Boogie Nights to John Cassavetes’ fondly sleazy The Killing of a Chinese Bookie. Channing Tatum was great in the lead role, and McConaughey (again; who’d a thunk it?) shone in a flashy supporting role as Dallas, the oiled-up, stripping patriarch.

Once Upon A Time In Anatolia (dir., Nuri Bilge Ceylan) | feature

Boringly thrilling? Or thrillingly boring? Either way, Ceylan delivered a cinematic oxymoron of rare depth and panache with this rich, long and deeply atmospheric procedural. When it finished, I genuinely felt like I’d been locked in the cinema all night with the film’s cast of exhausted, devastated characters. Existential malaise never tasted so good.

The surprise of the year, for me. After the crushing disappointment of the second half of Wheatley’s sophomore feature Kill List, my expectations for this black comedy were low. But what began as a cute riff on Martin McDonagh’s play ‘The Beauty Queen of Leenane’ swiftly turned into something much richer and darker. Sightseers was a merciless excavation of the murkily unpalatable underbelly of the British national character, filtered through a host of key tropes from the history of classic passive-aggressive British TV comedy. What’s more, all of this venom was set against Laurie Rose’s exceptional cinematography, which highlighted England’s natural beauty like few films have deigned to do. It stayed in my head for days afterward.

There were a few films painfully close to squeezing into my top 10. One was Ron Fricke and Mark Magidson’s “non-narrative, non-verbal 65mm journey” Samsara, which made me feel like I was flying at the time, but wore off fairly quickly afterward. Another film whose lasting effects didn’t quite match up to the visceral experience of watching it was Gareth Evans’ gripping (and absurdly violent) martial arts cracker The Raid (full review). The seediest film I saw this year was Beauty, Oliver Hermanus’ exquisitely composed and extremely disturbing tale of illicit obsession in contemporary South Africa.

I also really enjoyed a couple of big blockbusters (I’m only a preening arthouse dilettante for some of the time); Sam Mendes’ Skyfall had the lot: a good story, some great stunts, truly beautiful cinematography (kudos Roger Deakins) and, in Javier Bardem, a genuinely brilliant villain. Seeing it at a full-to-bursting public screening on its seventh (!) week of release underlined the extent to which this Bond bonanza was ‘event’ cinema at its best. I was also taken with Avengers Assemble; chaotic, overlong and in-jokey for sure, but also a hell of a lot of fun which possessed a keen sense of its own ridiculousness. It made me laugh like a drain on more than one occasion.

On the other side of the ‘fun spectrum’, Steve McQueen’s Shame, which sent me into paroxysms of praise at last year’s London Film Festival, cooled on me like few films in recent memory, not least in response to a discussion with my wife about the film’s questionable sexual politics. Her excellent piece on that theme, ‘Shame and Gender’, can be read here. Oh, and despite Mark Cousins’ pretty bizarre rant (I like him normally), I enjoyed Argo lots too.

2012 was also an excellent year for documentaries; I greatly enjoyed Malik Bendjelloul’s revelatory musical excavation piece Searching for Sugarman, and was very moved by Call Me Kuchu, a sensitive and shocking study of the day-to-day lives of brave LGBT campaigners in Uganda. Amy Berg’s West of Memphis was a powerfully made and propulsive dissection of a grim failure of US justice, but let itself down by indulging in some of the formal shock tactics it decried its villains (the West Memphis Three prosecutors) for using. Finally, though it was no doubt an acquired taste (you had to buy into the myth of LCD Soundsystem as one of the modern titans of popular music to swallow its precious combination of hushed reverence and relentless solipsism), I was ultimately seduced by Shut Up And Play The Hits.

There were a handful of films – very highly rated by people whose opinions I generally trust – that I never got round to seeing. These included: Bela Tarr’s final film The Turin Horse, James Marsh’s Troubles-based thriller Shadow Dancer, Jafar Panahi’s “not a film” This Is Not A Film, performance art doc Marina Abramovic: The Artist Is Present, David Cronenberg’s limo-fest Cosmopolis, and child soldier drama War Witch (which I’m not sure ever actually got/will get a proper theatrical release). I hope to get around to all of these sooner rather than later.

Thank you for reading. Do pop your head around the door for the second part of our end-of-year round-up, which will be with you shortly.