[Editor’s note: Economic Measures is a new, regular column celebrating those facial and bodily gestures in film that say a lot with a little.]

The twelfth and antepenultimate scene in Mania Akbari’s One. Two. One (2011) takes place in a telecabin carriage ascending Mount Tochal, just outside Tehran. It begins with Ava (Neda Amiri) recounting to a date (Payam Dehkordi) an amusing incident that occurred days previously. Telling it, she stutters, looks away from her date and talks more quickly and assertively, with fewer breaths, as if to regain control of both the anecdote and herself. All of this happens in an instant. Ava punctuates the end of her anecdote by rolling her eyes, acknowledging its silliness, to settle back from its melodrama and to return the watchful gaze of her date.

After she has finished her story, Ava’s date informs her that she has some lipstick on her teeth. She wipes it off. “Is it gone?” she asks. “Yep,” he replies. She purses her lips and smiles, suspending that fleeting moment in which a woman realises she is the object of a man’s gentle scrutiny, and looks away with something resembling a coy laugh. The hand on which she has propped her head moves in a gesture that is at once unconscious and self-conscious, a defence mechanism against the unflinching attention she is receiving.

Ava’s fingers come across her neck to form a kind of shield. Her chin rests on the back of her hand. A finger dares to twitch – or is it a self-caress? Feeling less open to would-be advances, she moves her entire head back to face the man sitting in intimate proximity across from her, to confront him, test him, return his intensity by eyeing him direct. In what is perhaps an instinctive need to regain poise and power, she spots a stray hair on his bald head, and returns a favour by lifting it and blowing it from her own hand. 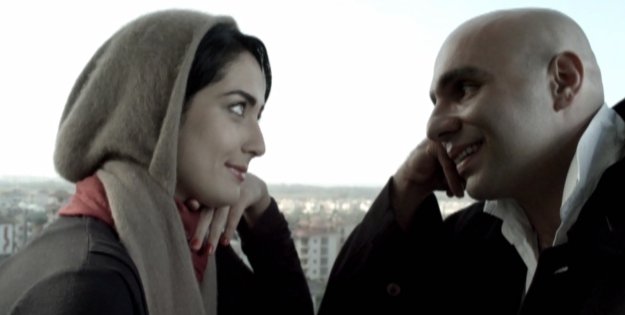 All of this unfolds within a fixed frame and in the space of half of minute. It’s gently, harmoniously, relatably erotic. It captures that nervous energy of a first or second date so well. Here are two people whose interest in one another might primarily be physical but whose connection has a palpable electricity that goes beyond lust – that excitement one feels at the onset of a new companionship. Such excitement is twofold. It is not merely about finding someone new, but also about challenging and renewing oneself – and, here, one’s sense of self, for Ava has, we know, recently recovered from an acid attack by her jealous husband.

In these moments, Amiri embodies the extraordinary courage and trust a woman must sustain in a society whose primary criterion of judgement is aesthetic beauty. When she licks and sucks the lipstick from her teeth, she averts the spotlight in embarrassed acknowledgement that she is being looked at, admired, desired, analysed – in a word, “othered”. She doesn’t dislike it, but experience has taught her caution. She must give little away, must not reciprocate too much. This is flirting, that process by which otherwise innocent gestures become charged with possibilities, in which that fine line between ambiguity and clarity seems both to widen and to disappear. Flirting creates a veil of innocence to retreat behind at the same time as it creates an expanse of new terrain to chart.

Neda Amiri might problematise One. Two. One’s apparent argument against the value placed by society upon physical beauty by being arguably the most beautiful actress alive. This is not her fault. As demonstrated in this and other scenes, however, her skill as a performer transcends the formal limitations of Akbari’s film and occasionally elevates its more mannered and irritating aspects to the stuff of brilliance. Self-conscious, exposed, explorative, fearless, Amiri demands and commands respect simply by embracing that terrifying concept of making a mistake or losing control. It’s no wonder her date is enraptured.

One. Two. One has just been released on DVD in the UK by Second Run. A season of Mania Akbari’s films runs at the BFI Southbank until 28 July. Contributor Michael Pattison can be followed on Twitter @m_pattison and runs the blog idFilm.net.