Denzel Washington is a great actor, but he’s been in a whole bunch of truly forgettable films. His latest, 2 Guns, might well turn out to be a cracker, but from the comically lazy title and poster combo alone, I’m not holding out too much hope. That said, in the film, Denzel is seen to be sporting facial hair, a hat and glasses; significant in that it reveals the need for the Denzel Washington Venn Diagram to be updated sharpish. Malcolm X has got company! 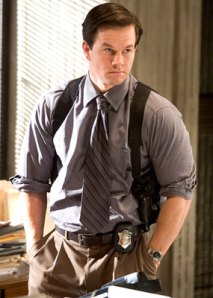 In a hit-and-miss film littered with wildly uneven performances, one man stands alone.

It’s not Matt Damon, nor Leo DiCaprio (yet to adopt ‘jaw-wired-shut and haunted with a slight moustache’ as his stock-in-trade) who, to be fair, give solid turns. It’s not Jack Nicholson, so over the top here that he makes Jack Torrance look as restrained as the girl who won’t talk from Corrina, Corrina. And it’s certainly not Ray Winstone, who mistakes a convincing Boston accent with speaking Cockney in a slightly lower register than usual.

No, the man who steps up to the plate is Mark Wahlberg, inhabiting his Boston roots with utter relish as Staff Sgt. Dignam, and stealing absolutely every scene that he’s in in the process.  Wahlberg hadn’t been this good since his mindboggling turn in Boogie Nights, and its arguable that he hasn’t been since, despite appealing performances in I Heart Huckabees and more recently The Other Guys.

Dignam is a solid cop, handy with his fists, and classically volatile.  He’s also the kind of guy we’d all love get away with being at work; nakedly, unashamedly scathing and unimpeachably rude to his colleagues as and when it suits him.  But his ire is not limited to just his workmates, rather anyone he encounters. His stinging one-liners provide the memorable highlights of the film:

“I’m the guy who does his job. You must be the other guy.”

“Whoa, whoa, whoa. Let’s say you have no idea and leave it at that, okay? No idea. Zip. None. If you had an idea of what we do, we would not be good at what we do, now would we? We would be cunts. Are you calling us cunts?”

And just to confirm Mark Wahlberg’s absolute owning of the film, it is Dignam who appears at the end to plant the retributive bullet into the head of the treacherous Sullivan (Damon), and calmly exit stage left.

Sgt. Dignam, I salute you.

The Best of Mark Wahlberg as Sgt. Dignam on YouTube.