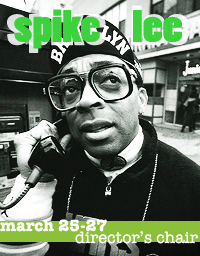 Of Spike Lee’s myriad achievements, one that is often overlooked is his crucial role in developing the careers of some of the best actors of the last couple of decades. The likes of Samuel L Jackson, Delroy Lindo, Denzel Washington (and even the redoutable Charlie Murphy of Chapelle Show fame) all worked regularly under his direction on their road to notoriety. Perhaps his most intriguing working relationship, however, is with the chameleonic character actor John Turturro, whom he has directed on no fewer than nine occasions . Here, I have chosen to focus on Turturro’s role in Lee’s 1991 film Jungle Fever, and how he manages to transcend some of the mercurial, talented filmmaker’s less appealing habits.

We first encounter the rather limp Paulie as the long-term companion of Annabella Sciorra’s Angie Tucci, who soon embarks on a risky affair with her architect boss Flipper. Freshly dumped, yet enamoured with Tyra Ferrell’s friendly Orin Goode, and dismissive of his ignorant crew’s ingrained bigotry, Carbone keeps a level head when all around are losing theirs and bravely pursues a relationship with the black lady. Although Erin is cautious, there is more than enough spark between them to suggest that a bright future may lie ahead.

Whilst the film is certainly honest in its intentions, it exhibits Lee’s familiar difficulty with self-editing, as well as his habit of introducing a variety of ideas without giving himself the scope or narrative space to fully develop them. Therefore, the subtlety of the subplot around Paulie and Orin, buried underneath the sturm-und-drang of savage famililal beatings, religious fundamentalism, police harrassment and crack addiction, is not only rare evidence of Lee’s lesser spotted lighter touch but a necessary respite amongst the drama and relentless issue-raising. 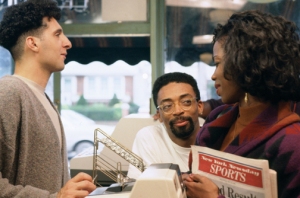 John Turturro (left) as Paulie Carbone and Tyra Ferrell (right) as Orin Goode, with Spike in the middle

Turturro’s performance is even more remarkable when viewed in contrast with his vicious turn as the racist Pino in the director’s earlier Do The Right Thing. In Jungle Fever, he manipulates his unusual features (framed by a pretty shoddy haircut) into a sympathetic visage. When he takes a beating from his friends in one scene, and pops up battered and bruised at Orin’s door in the next, the effect is uplifting. Similarly, when he virtually ignores a jettisoned, tail-between-legs Angie, you feel like cheering.

Turturro’s grace and dignity are greatly appreciated in a film rife with wildly uneven performances and laced with incidental caricature. On the plus side, Samuel L Jackson is utterly convincing and frankly terrifying as Flipper’s crackhead brother Gator. However, Tim Robbins and Brad Dourif are beyond parodic as the smarmy partners of Flipper’s architecture firm and the late Oscar-winner Anthony Quinn, in particular, as Paulie’s controlling father, turns in a performance so hammy that his rushes must have dry-cured overnight.

As in Do the Right Thing, The Big Lebowski, Five Corners, The Colour of Money and To Live and Die in L.A., we should be grateful for the shadings of a superb character actor at the top of his game. It’s a shame he’s not had more leading roles such as his greatest ever moment in the Coen Brothers’ masterpiece Barton Fink. It’s a wonderful thing that Lee is able to bring the very best out of him.