Author’s note: this essay first appeared in the booklet for BFI’s Life Is Sweet Blu-ray, which was released in 2017, and is available for purchase here.

“You’re working with a genius. I’m not just a wanker. I can teach you things you never even dreamed of. I’m a magician.” — Aubrey (Timothy Spall) in Life is Sweet

Few British actors can match Timothy Spall’s uncanny ability to burrow inside the skin of inept, off-putting or emotionally stunted characters, and make them so compelling: we can’t look away, even if we may wish to. Across a prolific career, many of the Battersea-born star’s most notable such performances have arrived in collaborations with the writer-director Mike Leigh – the pair are like the Robert De Niro and Martin Scorsese of British suburban malaise.

Spall first teamed with Leigh on the darkly funny BBC TV Play for Today Home Sweet Home (1982), playing a dyspeptic postman with a complex about his weight, and an endlessly antagonistic relationship with his wife. In Secrets and Lies (1996) and All or Nothing (2002), Spall again essayed everyday working men beset by marital problems: he was a paunchy, stressed photographer in the former, and a melancholic, slobbish cabbie in the latter; both characters had likely seen sunnier days. Spall has also worked with Leigh on the director’s two (to date) major forays into period territory. As the Mikado actor Richard Temple in Gilbert & Sullivan drama Topsy-Turvy (1999), he was portly and poignantly peacock-proud. His phlegmy, goblin-like incarnation of JMW Turner in artist biopic Mr Turner (2014), meanwhile, landed him the best actor prize at the Cannes Film Festival.

All of the above are, in their own ways, remarkable performances, and examples of Spall’s versatility and sensitivity. Yet for sheer film-stealing intensity, none can quite equal his startlingly unselfconscious – and frankly rather frightening – turn as the preposterous would-be restauranteur Aubrey in Leigh’s film Life is Sweet.

Released in 1990, Life is Sweet was the director’s second consecutive intimate portrait of British life in the Thatcher era, following High Hopes (1988). Propelled by character rather than plot, and set in a sleepy, suburban sliver of North London’s Enfield borough, it follows a few days in the lives of a middle-aged, lower-middle-class, happily married couple and their family. There’s amiable procrastinator Andy (Jim Broadbent) and chirpy, innuendo-prone Wendy (Alison Steadman, then Leigh’s wife), plus their early-twenties twin daughters, Nicola (Jane Horrocks) and Natalie (Claire Skinner), both of whom still live at home. 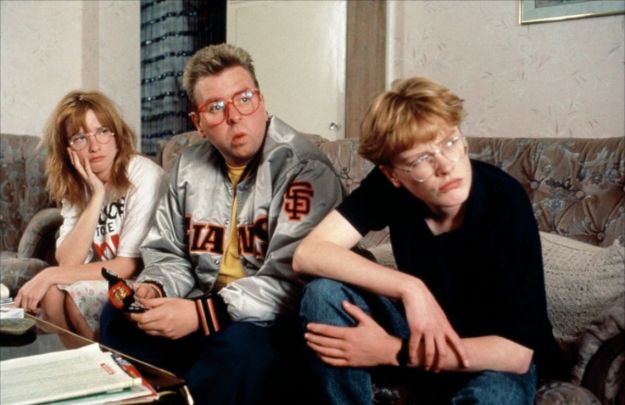 As well as family bonds, and Rachel Portman’s gorgeous, insistent score – a Gallic-flavoured waltz infused with equal parts pathos and pluck – the film’s connective tissue is the theme of food, as suggested by its mildly ironic title (Life is Bittersweet would be closer to the truth). Although the family make a point of eating together, the nervy Nicola suffers secretly from bulimia, and involves chocolate spread in her sex life with her disaffected boyfriend (David Thewlis), with messy results. Andy is employed as the head chef in an industrial kitchen, but, much to Wendy’s chagrin, is tempted by his palpably shady acquaintance Patsy (Stephen Rea) to invest in a ramshackle food van which requires more than a little work to be fit for purpose.

While clearly unwise, Andy’s purchase of the van – an off-white elephant which languishes outside the family abode – is made to look like a sensible enterprise when contrasted with the antics of Aubrey, an oddball family friend on the cusp of opening his own restaurant, “The Regret Rien: Tres Exclusive”. Already lumbered with a portentous name unsatisfactorily stranded between French and English, it is to be a garish, Edith Piaf-themed medley of haute and nouveau cuisine, offering such delights as ‘clams in ham’, ‘quails in a bed of treacle’, ‘liver in lager’, and ‘pork cyst’ (which is, according to Leigh, a genuine medieval dish). The restaurant’s opening-night fate is the event upon which the suspense of this determinedly low-key film hinges. The question, however, is not whether it will fail – we quickly learn that Aubrey hasn’t bothered to publicise it, and his waitress has quit before she’s even begun – but how spectacularly.

We’re offered a concrete clue the moment Aubrey first bursts onto the screen after roughly a quarter of an hour. Framed through the front window of the family house, from behind a curtain, we see him screech up in a top-down, candy apple red convertible, trailing exhaust fumes. He is an instantly absurd presence, rupturing both the film’s laid back tone and its muted, pastel-hued colour palette. When he hauls his corpulent frame from the driver’s seat, we get a good look at his eye-popping outfit: giant sunglasses perched below a peaked cap, a San Francisco Giants bomber jacket, a canary yellow shirt, and electric blue tracksuit bottoms with massive high-top trainers. Compiled by costume designer Lindy Hemming, this ensemble is an explosion of American-influenced juvenalia (he will later be seen sporting a Mickey Mouse baseball cap), so loud that a home viewer may feel compelled to turn down both the brightness and the sound. “People thought the way he dressed was over the top”, Spall told The Guardian in 2001, “but a year later lots of fat middle-aged blokes started to dress like teenagers.” He reaches down into the car, grabs a pineapple (a gift for Wendy, apparently), flings it into the air, catches it, then adjusts his cap – a hint at the vanity to come. A subtle camera move to the left reveals that Nicola has been watching this performance from the window, and, understandably, she seems apprehensive about welcoming this visitor in. “Hi Natalie”, he mutters when she finally opens the door. “It’s Nicola!”, she spits back. It’s quite an entrance.

So what were the origins of this strange man? Like all of Leigh’s characters, Aubrey emerged from an intensive process of rehearsal, where improvisation and experimentation were encouraged before a final script was locked in place. As Spall told The Guardian, “At the beginning of a Mike Leigh film each actor picks someone they know as the starting point for their character, and the problem with the person I picked, who shall remain nameless, was that he had absolutely no character whatsoever. The only personality he had was the one he invented for himself, which tended to change every day.” So, in Aubrey, Spall built up a synthetic man, defined from the outside in by his mutability and myriad affectations. Consider his speaking voice, a halting baritone burble which he punctuates with the meaningless phrase “ya know?”

Aubrey may seem like an incidental character, or even a mere laughing stock, but he is richly detailed, and offers a gateway to a number of the film’s knottier issues and Leigh’s enduring obsessions, including class, aspiration, and dangerous masculinity. The director is no stranger to creating nightmarish Thatcherite figures in his work, from yuppie couple Rupert and Laetitia in High Hopes, to the monstrous rapist Jeremy in Naked (1993) — in each case, the viewer is clear on how we were supposed to react to them: utter disgust. Aubrey, though, is more complex. When his dream turns sour, and literally nobody turns up to opening night, he marches out in front of the restaurant and embarks on a bitter rant about “working class morons” who should “eat their own shit … English dickheads, stick to your fish and chips!” Aubrey is, of course, the architect of his own downfall, yet I can’t help but feel a little sorry for him here, even if Leigh doesn’t. He has ambition, and international taste, yet Leigh seems to damn Aubrey with the peculiarly English concept of “having ideas above one’s station”. (By the way, Life Is Sweet came out fourteen years before the first episode of Gordon Ramsey’s Kitchen Nightmares: Aubrey would seem a prime candidate for the Ramsey treatment.)

Another aspect of Aubrey’s brilliance as a character is that his weird presence provokes complicated responses from everyone around him. It’s a joy to watch other actors react to his often unreadable body language and bizarre actions — how did any of them keep a straight face while Aubrey hammers out a double-speed version of “Je Ne Regrette Rien” on his thighs while singing the words in a cut-rate Enfield Elvis voice? As a pair, Andy and Wendy are ostensibly friendly and welcoming, but their teasing of Aubrey often tips into cruel territory: they are laughing at him, not with him (Aubrey never laughs; in fact, he is chillingly humourless.) On their first visit to the Regret Rien, Andy and Wendy can’t restrain their amusement. You can’t blame them, of course: Aubrey’s idea of suitable decor is a wall-mounted taxidermied cat’s head, gas mask, and a knackered accordion, to represent “the street, the war … and the music of Paris”. And while Wendy appears to be doing Aubrey a favour by stepping in as an emergency waitress, one senses that she’s at least partially doing so to get a front-row seat at the inevitable car crash, which duly arrives. This type of ambiguous dynamic is not uncommon in Leigh’s work. In particular, Wendy’s amused chiding of Aubrey anticipates the way Poppy (Sally Hawkins) taunts and teases the unhinged cab driver Scott (Eddie Marsan) in his 2008 masterpiece Happy-Go-Lucky.

The most disturbing aspect of Aubrey is his predatory sexuality which, directed at multiple female targets, manifests both insidiously and aggressively. There’s a creepy moment in his first encounter with Nicola, when he complements her on her knees, causing her to immediately cover them up with her oversized “Bollocks To The Poll Tax” T-shirt. Disparate artefacts in Aubrey’s bedroom — a stack of Playboy magazines, the infamous 1980s Athena poster of a bare-bottomed female tennis player — hint at arrested development; a horny teenage boy trapped in a dangerously big man’s body. There’s outright misogyny, too, when he loses himself in a bloody revenge fantasy against the waitress who lets him down (“If I ever see her again, I’ll stick a knife in her guts. I’ll slice her face off.) He is reprehensibly lecherous toward his mousy kitchen “dogsbody” Paula (Moya Brady), whom he incorrectly addresses as “Pauline”. And in his final, dismal, alcohol-fuelled flourish, he tries to force himself on Wendy (“I wanna fuck you”), before stripping down to his underpants in the restaurant, and collapsing into a semi-coma. The last we see of Aubrey is a huge close-up of his face perpendicular to the ground. He grotesquely licks his fingers and mouths Nicola’s name — was he harbouring a desire for her the whole time? Leigh leaves it cryptic.

Because Life is Sweet is a generally upbeat film, it can be easy to forget how dark it gets in places. And it is Aubrey — with his tempestuous cocktail of misogyny, vanity, and violence —  who brings this darkness. It is he who points most clearly toward the direction Leigh would take in his next film Naked, a scabrous and upsetting study of men who bolster their own fragile egos by attempting to control and seduce women.

In that Guardian interview from 2001, Spall dubs Aubrey  “a complete tosser”, and describes his eventual meltdown as “the complete death of a hollow man.” Spall has a point, but, working in tandem with a director so focused on crafting detailed characters, he triumphs in transforming a human void into something bumptious, hilarious and, ultimately, deeply haunting. Ya know?

1 thought on “The Spall Appall: Food and Failure in Life is Sweet”