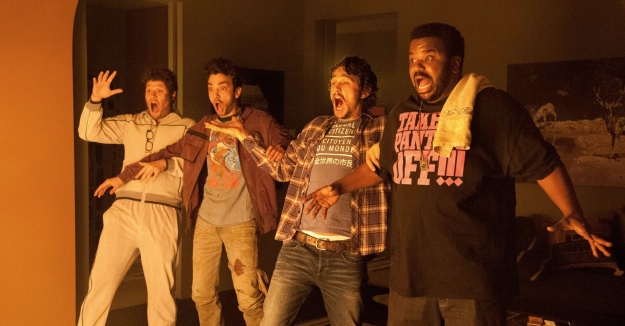 Loosely based on their 2007 short Jay and Seth vs. the Apocalypse, comedy-writing team Seth Rogen and Evan Goldberg have reimagined the End of Days from the perspective of a group of friends trapped in James Franco’s Hollywood home. As the Apocalypse rages outside, the group (Rogen, Franco, Jay Baruchel, Craig Robinson, Jonah Hill and Danny McBride) must come to terms with themselves, their friendships and the total, unequivocal destruction of everything ever. Cue the dick jokes.

The cast is essentially a reunion of stars from earlier Rogen/Goldberg films, all friends in real life, and fully prepared to take the piss out of themselves by playing up to the common (negative) public opinion of A-list celebrities. They clearly had a lot of fun making this, which translates best in extended scenes of dialogue rather than the later CGI horror/action sequences. The film’s strengths naturally lie in the sharpness with which the character relationships are portrayed. Male friendship and bonding rituals have always been a big focus in the pair’s writing, and they’re particularly astute at revealing the nuances in male egos that make their characters feel solidly human. In the wrong hands This Is The End might have slipped into lowest common denominator gross-out territory, but Rogen and Goldberg provide customary vital touches of warmth and sadness. Like their other efforts it’s also genuinely funny, their expert way with a cutting put-down shining especially brightly here.

Where the film falls down slightly is in the concept, which is initially interesting, but ultimately tiring. There’s the gnawing impression that Rogen and Goldberg weren’t wholly clear where to take the idea, and that the clearly sizeable budget allowed for too much. The first disaster sequences are actually pretty tense, the shocks real. But herein lies the problem; if you’re going to start a film with tension it becomes obvious when the tension is lost. Much of the plot outside of the house in the later stages is half-baked – as though everything around the original scenario has been more or less tacked on. Rogen and Goldberg don’t seem interested in developing the setup in unexpected ways and thus come to rely heavily on star cameos to carry through the lulls. Besides that, the film slips into self-indulgence fairly easily. What you end up with is a movie that looks at first like a blockbuster, feels for a good while like a joke between friends, and then sputters around in the final third like a balloon that’s not been tied at the end, finishing (probably like the earth itself will) with a whimper, not a bang.

At the end of the days though (honk!) this is an enjoyable and very funny addition to the Superbad/Pineapple Express collection of US comedies with a bit more bite; perfect fodder, in our globally warmed times, for the excruciating and pathetic death-whimper of the British summer.

This Is The End is in cinemas from Friday. Contributor Ed Wall can be followed on Twitter @edward1wall