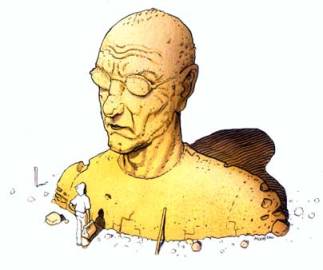 Jean Giraud passed away on 10 March 2012, aged 73. To comic book fans around the world he was mostly known – and revered – as Moebius, a nom de plume the French artist used when he imagined sci-fi adventures, or Gir, the one he used to draw the enduringly popular “baguette western” Blueberry. “Cowboys versus aliens” would be a great way to sum up Giraud’s oeuvre, if it wasn’t also the title of a terrible movie.

Though it may seem like a bit of a stretch to justify the title of this piece, in many ways, Moebius was all by himself the Daft Punk of the comic-book world. His own brand of French Touch was largely influential on both sides of the Atlantic; from Marvel comics to avant-garde bande-dessinées – and all the way to Japan. Giraud himself surely liked the duo, maybe not for their music, but their bionic look. Indeed, the publishing house he co-founded to print the cult magazine Metal Hurlant and free himself from the constraints of the conservative Franco-Belgian strips is named Les Humanoïdes Associés (Humanoids Inc.). Hell, the robotic duo even make an appearance in Tron Legacy, the sequel of the 1982 film for which Giraud was largely aestheticlally responsible. The desertic setting and bizarre bursts of nudity in their own movie Electroma are pure Moebius.

Since PPH is not a graphic novel or comics blog, I’ll have to send you to Steve Holland’s apt obituary in The Guardian for a more detailed overview of Moebius’s impressive career in his favoured field. What I’d like to do here is focus on Giraud’s cinematic heritage, particularly his extensive influence on the last thirty years of sci-fi, from Blade Runner to The Fifth Element.  This is something I already started when I wrote about “french comic-strip maverick at the movies” for Sight and Sound magazine a few years back.

Interviewed by the prestigious newspaper Le Monde a couple of years ago, Moebius declared, “I’ve always tried, since [my] earliest childhood, to make films on paper.” So let’s take a closer look at Giraud’s “filmography” – on paper and on film – as a parting homage to the visionary he was.

In 1978, the “adult” comics magazine Metal Hurlant (co-founded by Giraud and later developed in the US under the name Heavy Metal) published The Long Tomorrow. Penned by Dan O’Bannon, a close collaborator of John Carpenter on Dark Star, it was a parodic transposition of Raymond Chandler’s universe into the future, providing Ridley Scott with the sci-fi meets noir concept that would make Blade Runner so distinctive.

Scott didn’t yet know he would make such a film, but Moebius became some kind of obsession: “At the time I was staring at Moebius magazines – I had them stacked in my study when I was a commercial maker, even before I did The Duellists – and I was thinking, my god, they’re a great vision of futuristic ideas. I was influenced almost totally by Moebius.” Consequently, the English filmmaker didn’t hesitate when, a few years later, he stumbled upon a script entitled Alien, written by… Dan O’ Bannon.

Moebius immediately got the call to help define the visual identity of the film, along with H.R Giger. The Swiss sculptor elaborated the viscous, Bacon-esque creature while Giraud drew the iconic spacesuits (some kind of samuraï armour topped with a diving bell) and costumes. “I wanted them to look like space truck drivers, wearing plain T-shirts and functional, random clothes.“

Extract from “The Long Tomorrow”

Infitine skycrapers. Flying cars. Neon everywhere. Populated by shifty androids and bitter humans, the baroque metropolis of The Long Tomorrow is undeniably the blueprint upon which Ridley Scott based his futuristic Los Angeles in Blade Runner. The director gladly admitted it in the DVD commentary of the recent final cut reissue but neither Moebius nor O’Bannon are mentioned in its end credits.

Contractual issues seem to be the reason why Moebius didn’t effectively work on the film like he did on Alien. His fingerprints are nevertheless everywhere, fuelling the enduring vision of Scott that would mark the sci-fi aesthetics of the following decades from the cyberpunk movement of the 1980s to mangas like Ghost in the Shell (1995), and family blockbusters like Luc Besson’s The Fifth Element (more on this later).

The genesis of both the above films actually comes from another science-fiction white whale, the adaptation of Frank Herbert’s classic novel Dune. In 1974, the avant-garde Mexican director Alejandro Jodorowsky was stil basking in the cult success of his “acid western” El Topo, that earned him the lifetime admiration and financial backing of John Lennon. Backed by an obscure montage of international financiers, he embarked on the project to adapt the reputably unadaptable opus. To tackle the near-impossible task, he assembled a creative unit in Paris, comprising of Moebius, Dan O’Bannon, H.R Giger and Chris Foss (a British illustrator known for his sci-fi covers) – all working together for the first time.

The project was a typical mid-seventies extravaganza. The rumour mill had it that Orson Welles and Salvador Dali were part of the cast, with the surrealist painter allegedly demanding $100,000 a day to play the Emperor Shaddam Corrino IV. Pink Floyd, along with other psychedelic groups, started working on some songs for the soundtrack. Among other follies, the main protagonist was to be played by Jodorowsky’s son and the film duration was planned to reach 14 hours.

A year later, Giraud had drawn 3,000 sketches for the film, the script was “the size of a phonebook” according to Herbert, and  $2 million of the $9.5 million budget had already been spent in pre-production. The American distribution company involved in the project pulled the plug, and soon enough the French producers still on board called it a day. The rights of the book were sold to Dino de Laurentiis, and the rest is history. David Lynch’s version, released in 1984, didn’t reuse any of Jodorowsky’s preparation, and was later disowned by its director.

Nevertheless, without Dune, Dan O’Bannon wouldn’t have written The Long Tomorrow out of boredom on his days off and given it to Giraud. Also, he wouldn’t have been depressed by the failure of the film to the extent of writing Alien. Which in turn wouldn’t have given the Ridley Scott the opportunity to reassemble the winning trio of O’Bannon, Giger and Moebius for Alien. Nor would the material at the origin of Blade Runner have existed. Jodorowsky went on to pen dystopic sagas for Moebius with the successful Inkal series (from 1981 to 1989), which updated The Long Tomorrow imagery and ended up as the primary influence on Besson’s The Fifth Element.

Giraud, probably marked forever by the Dune fiasco, was always rather dismissive of his experience in the film industry. Tron is the exception. Hired by Disney to draw the integrality of the storyboard, Moebius remembered fondly working on the first ever movie to use computer generated images : “My involvement in this film was much more intense and important than the work I did on Alien. I love this film.” Indeed, the clear lines and curves of Tron‘s cyberworld bear without a doubt the mark of Moebius’ unique style.

In the following years, Giraud kept on drawing for Hollywood, creating visuals for the seminal heroic-fantasy turkeys (and also terrific mid-80s guilty pleasures) Masters of the Universe and Willow. However, George Lucas didn’t use any of his designs, nor did James Cameron, who found his ideas of the subaquatic creatures in The Abyss a bit too leftfield.

From L’Inkal, by Jodorowsky and Moebius.

The Fifth Element is probably the film that owes the most to Moebius, even more so than Blade Runner. It didn’t just keep the flying taxis hovering over the bottomless metropolis of The Long Tomorrow and L’Inkal – it also recycled Giraud’s humour and esoteric penchants.

Moebius was hired by Besson as early as 1991 to work on a script entitled Zaltam Bleros. The project was be revamped until it became the high-camp space opera we know today, but most of the sets and costumes come from this first draft. On The Fifth Element, Moebius shares the “artistic direction” credit with Jean-Claude Mezieres (another figure of French bande-dessinée and a friend of Giraud from art-school ), which is euphemistic, so much does the movie looks like an adaptation of his oeuvre. Indeed, the script bears so many similarities with Moebius’ Inkal series and Enki Bilal’s work (a disciple of his also published in Metal Hurlant), that Les Humanoïdes Associés sued Besson for plagiarism. A case which they ultimately lost.

An art student in Paris during the peak of the Nouvelle Vague movement in the early 1960s, Giraud had no choice but to become an instant cineaste. Logically, Jean-Paul Belmondo became the model on which “Gir” based his rogue lieutenant Blueberry. They were countless cowboys adventures in French bande-dessinées at the time, but Giraud’s creation, along with writer Charlier, instantly made a difference. Infused with a real sense of frame and montage, its incredibly detailed landscape and overall ruggedness owed everything to American Westerns.

“Cinema is the image reservoir for Blueberry,” Giraud used to say. “It owes a lot to Sam Peckinpah. The Wild Bunch overwhelmed me. There’s also some Sergio Leone there. But as for Blueberry’s close relationship with Indians, I got that from John Ford, who, all his life, was torn between his own white machismo and the consciousness that oppressed minorities also existed along the conquest of the frontier.“

Starring the badass trio of Vincent Cassel, Juliette Lewis and Michael Madsen, Jan Kounen’s 2004 adaptation of Blueberry (renamed Renegade outside France) marked the first time Giraud’s work was directly adapted for the big screen. Unfortunately, despite its great cinematography, the film bombed with audiences and critics who expected a faithful, mainstream rendition of the heritage bande-dessinée. What they got is an experimental albeit clumsy transplant of Moebius’ psychedelic fantasies into Blueberry’s more conservative universe (which many called a treason of Gir’s work) with a ten minute, pre-Enter The Void CGI peyote trip slapped into the third act.  None of this fazed Moebius, who credited his experience of hallucinating drugs in his early twenties during a nine month trip to Mexico to be responsible for his creativity, schizophrenic production and split personality.

“I was involved in several projects as a director in the past, but in the end, I didn’t complete any. I wouldn’t say that cinema left me dry on the road, but that I just let it pass me by.” Indeed, his unique directorial effort is the rather disapointing 3D animation short, La Planète Encore, which was shown during his retrospective at the prestigious Fondation Cartier in 2010.

Moebius’ creative flair must be found elsewhere – and it’s almost everywhere. In his close friend Hayao Miyasaki’s surreal fables for example, or Christopher Nolan’s attempts at cerebral sci-fi. “Inception develops the motifs of parrallel worlds and dreams that were present in my comics, like Le Chasseur Déprime”, Giraud would say to Le Monde. Just a couple of years ago, David Fincher, Zach Snyder and James Cameron seriously considered remaking Heavy Metal (1981), the Canadian animation film derived from the American version of Metal Hurlant, the publication Moebius created as an output for his “deviant” production. The project, despite being many fanboys’ wet-dream, never happened. Instead, Trey Parker and Matt Stone put out Major Boobage, a South Park episode in which Kenny, after snorting cat’s pee, would get high and dream himself in the world of Heavy Metal, riding dragons and meeting bare-breasted desert princesses. Now if that’s not a sign of Moebius’ importance in pop culture, I don’t know what is.

Further viewing: the excellent Moebius Redux documentary, broadcast on BBC4 a couple of years ago.