I really like Jeanne Moreau. What’s not to really like? The heavy-lidded insouciance of her gaze. The husky purr of her voice, undoubtedly nurtured by a several-packs-of-Gitanes-a-day habit. The attitude that challenges you to find her irresistible while simultaneously not giving a Gallic toss whether you do or not. I present Jacques Demy’s La Baie des Anges as case for the defence. Just see if I’m not right.

Louis Malle didn’t exactly discover Moreau but he certainly gave her an almighty shove up the career ladder. In his first two fiction features, the Malle-Moreau chemistry worked wonders for both parties, on-screen and off. In Ascenseur pour l’échafaud Moreau wanders the Parisian boulevards throughout the night while her lover is trapped in a lift. In Les Amants she wanders in the wee small hours through the woods in her nightgown before taking a bath with the lover she’s just picked up. Nobody takes a nocturnal stroll quite like Jeanne Moreau. 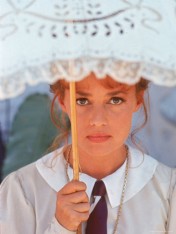 After making the downbeat Le feu follet (also featuring Moreau in a minor role, and recently re-invented in Norway as Oslo, August 31st), Malle decided it would be welcome change of tone to make a comedy. This might have been a fine plan, except Louis Malle had no talent for comedy. His previous attempt, Zazie dans le Métro, though formally clever and inventive, seems to last twice as long as its 90 minutes in its desperate quest for wackiness. Viva Maria! also proves to be something of a challenge for an audience in search of a laugh.

The set-up is promising: Brigitte Bardot and Jeanne Moreau as a pair of travelling performers discovering striptease by fluke, in what’s probably the first female buddy movie. Their musical numbers together are the most enjoyable aspect of the film. The scene where Bardot accidentally bursts out of her costume during a song, then continues to strip to the inevitable excitement of the audience, has a certain charm, although Barbara Windsor will forever remain the Queen of Accidentally Bursting Out Of Her Costume. And a few years later Catherine Deneuve and Françoise Dorléac occupied the stage with much more pizazz in Les Demoiselles de Rochefort.

It’s an uncertainty of tone that holes the film beneath the waterline. It veers across genre and style like some mishmash of Carry On, Monty Python, Luis Bunuel, The Wild Bunch, The Charge of the Light Brigade, Jesus Christ Superstar and Calamity Jane. The plot (if we can be bothered with it – certainly the screenwriters didn’t appear overly concerned) involves two performers both called Maria travelling around Central America with a circus at the start of the 20th century. They witness the sufferings of the peasants under the sadistic dictator Rodriguez, and after Maria I (Moreau) falls in love with the doomed revolutionary leader Flores (George Hamilton), the girls lead a popular revolt to victory over the dictatorship and the corrupt Catholic Church.

One minute we have the two Marias performing a fluffy song-and-dance routine, the next we have a brutal massacre and enslavement of peasants. Then there’s George Hamilton making his entrance like Christ on the road to Calvary, forced by his captors to carry a beam of wood across his shoulders, while giving Bardot a run for her money in the unfeasibly well-coiffed hair stakes. The Hamilton role is completely absurd but presented earnestly and without a whiff of humour. He speaks po-facedly of the degradation of the peasants and the necessity of revolution as if he had just read ‘Marxism for Dummies’, and with all the conviction of someone who knows he is being out-acted by his French voiceover artist. The scene in which he makes sweet love to Moreau in his jail cell, all the while chained to that inconvenient cross, is beyond parody, yet the plaintive guitar and lush string accompaniment indicate that we are meant to take it at its romantic face value. 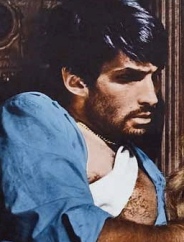 George, putting the "ham" in Hamiltion

When Hamilton flutters his pretty lashes for the last time, Moreau, fired by her promise to continue the revolution, makes a speech based on Mark Antony in Julius Caesar that rouses the assembled peasants to rise against their oppressors. The speech is designed to awake indignation in the audience too, but since it is sandwiched between scenes of unfunny farce, all it awakens is an awareness that this film has been going for an hour and a quarter (only half an hour to go).

And so it continues. Relatively straight shoot-out action sequences and scenes of would-be dramatic impact are undermined by bizarre moments of surrealism (as they cross a barren desert, they encounter the upright skeletal remains of a horse and its rider) and weak humour (the cross on a church spire being used as a semaphore signal). The final sequences unexpectedly rope in a Spanish Inquisition that is straight out of Monty Python, and unveil the military genius of Brigitte Bardot. Ah yes, Bardot plays the innocent, virginal daughter of an Irish revolutionary, easily mistaken for a boy despite her proficiency with false eyelashes, who, after a night with the lads that would make a Premier League footballer blush, becomes the type of revolutionary strategist that chalks her conquests on the wall of her caravan. And who goes into a bit of a sulk when Moreau nabs Hamilton first.

Of course it’s all nonsense and not to be taken too seriously. The problem is that Malle does take it seriously for curiously long periods, resulting in a film with a tone as uneven as Bardot’s impersonation of an Irish boy. It looks good and the large budget is reflected in the crowds of peasants swarming across Mexican hills, but it’s an incoherent mess and rebelliously unfunny. So, a film that you probably haven’t seen and definitely shouldn’t? Well, yes. But, you know, it does have Jeanne Moreau in it…