“If I drive for you, you give me a time and a place. I give you a five-minute window, anything happens in that five minutes and I’m yours no matter what. I don’t sit in while you’re running it down; I don’t carry a gun… I drive. ” – Driver

Adapted from the 2005 novel of the same name by James Sallis, Nicolas Winding Refn’s Drive arrives in UK cinemas accompanied by an extraordinary critical buzz accentuated by the presence of man-of-the-moment Ryan Gosling in the leading role, and Refn’s victory (for Best Director) at this year’s Cannes Film Festival.

In Drive, Gosling plays an unnamed mechanic and stunt driver for the movies who, when not working in the garage of Shannon (a grizzled, shifty turn from Bryan Cranston), moonlights as a devastatingly punctual getaway driver. Driver falls for his neighbour Irene (Carey Mulligan), who has a young son and a ne’er-do-well husband soon to be released from prison. Upon the husband’s release, Driver becomes embroiled in a violent game of cat and mouse involving robbery, revenge and some vicious gangsters.

From the very first minute onwards, Drive is a film obsessed with surface and artifice. The bright pink typeface used in the opening credits immediately explodes any notion of restraint, and intimate details of cars and costume alike are fetishistically lingered over by Refn’s camera. Driver himself is a role player – as a stuntman an anonymous, spookily-masked cog in the Hollywood machine, and then as a protector; a white knight defending a damsel in distress – who only really seems to be whole when at one with his car; this, perhaps, is the central relationship of the film.

In keeping with the recent cultural retromania for the 1980s that can be traced in the music of Phoenix and M83, the look of Sofia Coppola’s Marie Antoinette, the never-ending stream of period Hollywood remakes (The A Team, Miami Vice, Footloose) and perhaps most appositely, Rockstar Games’ Grand Theft Auto: Vice City (upon which Refn’s film seems to be squarely aesthetically based), Drive‘s style is all-consuming. Shot on gleaming HD digital in glorious widescreen and underpinned by a constant, synthetic low-end thrum and an arch, retro (and thoroughly excellent) soundtrack that’s indebted to Wang Chung’s work on William Friedkin’s inexplicably underrated To Live And Die In L.A. it’s a treat for the eyes and ears.

Furthermore, Winding’s determinedly European sensibility, epitomized by the deliberate pace, repeated use of slow, langourous takes and minimal dialogue, infuses an American movie staple location with an otherworldly quality; think Wim Wenders in Paris, Texas for a particularly good example of such Americana-obsessed outsider art, and Wim Wenders’ The End of Violence for a particularly bad example. Extras are kept to a bare minimum, so the spatial landscape is as sparsely populated as the dialogue in the script. 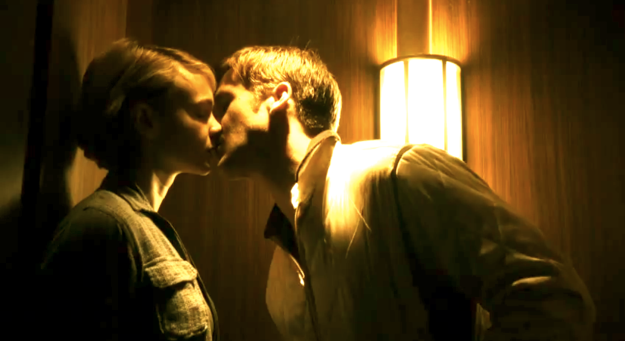 Mulligan and Gosling - Lifted, from the shadows. Lifted

The minimalism extends to Gosling’s character, nameless and shorn of a backstory primarily to engender a sense of mystery. His assumption of the lone wolf/avenging angel archetype is a mythical concession from Refn, but also lends a vaguely troubling undercurrent to Drive. Driver is prone to bouts of near-cloying sentimentality (in getting involved with Irene and her son in the first place) and seems to be on some kind of moral crusade (he doesn’t actually have to get involved in any of this) but is also increasingly psychotic, dispensing vigilante justice in a series of acts of sickening brutality. Despite the contradictions inherent in the character, and Gosling’s charisma, Driver never quite registers as a compelling force, rather he appears as a “man who isn’t there”.

Drive is a film which wears its influences on its (sleek satin) sleeve, and in citing Melville’s Le Samourai, Peter Yates’ Bullitt and George Stevens’ Shane (the all-American hero narrative) as key base texts, Refn is clearly a man of good taste. However one title absent from much of the discussion of the film is Walter Hill’s astonishingly similar 1978 thriller The Driver in which a nameless, taciturn getaway driver (sound familiar?) played by a perfectly cast Ryan O’ Neal finds himself inveigled in a complex plot of cross and double cross on the burnished, neon streets of L.A. In fact, at least two scenes appear to have been lifted wholesale (the opening car chase, and the bed-based intimidation of a duplicitous lady) from Hill’s film, and it’s difficult not to compare. Whereas Refn (who revealed at the BFI he hadn’t seen The Driver before commencing work on Drive) muddies the ethical waters by affording Gosling’s driver an emotional spectrum of sorts, Hill leaves O’Neal as a total blank; The Driver absolutely boiled down to existential essentials, whilst Drive has a weirdly sentimental streak that sits ill-at-ease with the flagrant death and destruction on display.

With appearances key, the casting in the film is interestingly off-kilter but not 100% successful. A resurgent Albert Brooks (referred to by Refn at a recent Q&A at London’s BFI Southbank as “Woody Allen’s psychotic twin brother”) and the imposing Ron “Hellboy” Perlman both combine menace and humour to great effect, but Carey Mulligan is miscast in a pivotal role. She comes across as sweet, but lacks the presence and depth that the role surely requires to make Driver’s fiercely emotional response to her ring true. The lack of chemistry between the pair also accounts for the sluggish first half hour of the film; Refn is clearly aiming to build tension and create an atmosphere, however the stolen looks between the two amount to little more than a series of pretty widescreen pictures; tellingly, the film only comes to life when the expertly choreographed and edited (yet sometimes laughably O.T.T.) violence explodes. To achieve certain gruesome effects, Refn reportedly consulted with French enfant terrible Gaspar Noe to find out how he achieved the delightful head-smashing sequence in Irreversible.

Ultimately, Drive is an enjoyable ride; slick, often unbearably tense and extremely stylish. It’s also a case of sheen over substance, but deliberately so, and to criticise the film on these terms would be like taking Michael Bay to task for being bombastic (as opposed to simply a terrible filmmaker). Unfortunately though, it’s the hollowness at the heart of Drive which precludes emotional investment in the drama, and stops it from rising above the level of a very entertaining technical exercise to scale the heights of greatness. It’s several cuts above your average thriller, though, and thanks to the combination of the popular Gosling, the iconic aesthetic, memorable set pieces and the brilliant soundtrack, it’s surely destined to become a cult classic.

A note: I normally post the film’s official trailer to accompany a review. However, I have neglected to in the case of Drive, as I feel the trailer – which mirrors almost exactly the arc of the narrative – simply gives away far too much of what is already a spare story to begin with, to the extent that a number of scenes in the film simply didn’t have the impact they would have had I gone into the film blind. Instead, here is a clip from the excellent opening sequence, followed by the opening sequence of Walter Hill’s The Driver, for complementary and comparison purposes.