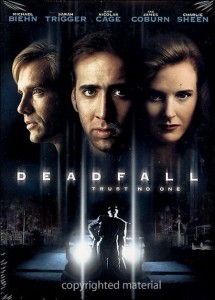 The DVD cover of Deadfall (1993), featuring Nicolas Cage looking NOTHING LIKE HE DOES AT ANY POINT IN THE FUCKING MOVIE! WTF!?

We all love Nicolas Cage. We’ve all seen Nicolas Cage losing his shit. Some of us have seen the wonderful Nicolas Cage matrix. But as far as I’m concerned, much more needs to be made of the one film in that first compilation that I couldn’t put my finger on.

The one where Cage is sporting an oil-slick bowl-cut, McDonalds sunglasses, and Rupert Pupkin moustache.  The film that didn’t even make it onto the Nicolas Cage matrix.

The one that is called Deadfall.

All credit here must go to YouTuber (and heroic compiler of the most appalling movie scenes of all time) watercooler who, three or four years ago, must presumably have been able to stop laughing for long enough to cut together a comprehensive record of one of the most profoundly baffling performances in the history of cinema.

As Cage goes from strength to strength, from berserk to berserker, I love to imagine the director (incidentally Christopher Coppola, Francis’ nephew, who proves himself more Jack than Apocalypse Now) sitting in his chair, head in hands, wondering how he might be able to curb the engulfing typhoon of cheese and ham without hurting anyone’s feelings. Equally, I love to imagine that Cage did this on purpose to deliberately ruin Coppola’s career.  After all, Cage went on to win an Oscar, Coppola went on to… feature on a Cats 101 episode on Animal Planet with his pet Burmese cat Otto.

1 thought on “Tears of laughter, guaranteed. Nicolas Cage on fire.”