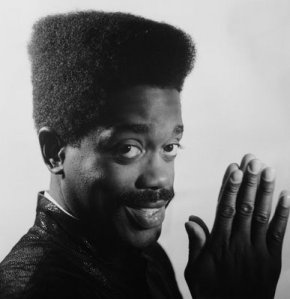 The second in an occasional series of contributions from a bona fide star.

Yo! It’s Larry Blackmon here, and let me tell you this: what I don’t know about CAMEOS ain’t worth knowin’!

Today its the turn of Limey punks The Clash, and their blink-and-you’ll-miss-it (especially-if-you-didn’t-know-about-it) appearance as “Street Scum” in Scorsese’s bleak satire. It turns out that Marty and Bobby (de Niro) were big fans of the boys, and regulars at their legendary New York shows, so they invited them on set. OW!

Rarely spoken of in the hallowed context of his great work (Taxi Driver, Raging Bull, Goodfellas etc.) and a massive box-office flop upon its release, The King of Comedy is one of Scorsese’s most underrated films. It’s strange – but I like it. Mightily prescient about today’s cult of celebrity, and full of treats (including Jerry Lewis’ magnificently sour performance as TV host Jerry Langford), it confounds expectations in a chilling manner; I guess the crackers who had seen Raging Bull a couple years before just weren’t ready for it. Shorn of the directorial pyrotechnics traditionally associated with Scorsese, it is filmed in a deliberately flat TV-sitcom style which foments the icy tone and disconnected-from-reality nature of the characters.

For my money, it also contains one of De Niro’s finest performances. As the ingratiating, insecure Pupkin, he totally disappears into the role, creating the type of wheedling wannabe who was probably a rarity in 1982, but is comparatively run-of-the-mill now. Compared to some of the freaks and psychopaths we’ve been exposed to in reality TV-land, Pupkin is someone you’d (almost) happily go for a Coca-Cola with.

Anyway, with regards to The Clash cameo – don’t just take my word for it,  I could be jivin’ you!  Have a watch: