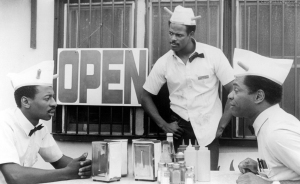 Another day at Winky Dinky Dog

Next on the list of films that have probably passed you by, but you must see, is this wicked satire on 1980s Hollywood’s racial mores, farcically still unavailable on DVD in the UK.

Elegantly shot on a super-low budget by future Mulholland Dr. DP Peter Deming, Hollywood Shuffle stars Robert Townsend (who also wrote and directed) as Bobby Taylor, a young actor struggling not only to find work but to avoid the unilaterally stereotyped roles of pimps, criminals and slaves being offered to black actors. Over the opening credits, we can hear a barrage of hackneyed, histrionic ‘jive talk’, revealed to be Taylor rehearsing for his latest audition in front of the bathroom mirror, while his little brother looks on amused. From the first minute, we are in no doubt that Taylor is aware of the innate ridiculousness of his situation.

As the film continues, Taylor is faced with problems from all sides; competition and opprobrium from his fellow actors, the crab-in-a-barrel negativity of his moronic colleagues at his day job at Winky Dinky Dog (his Napoleonic boss is played by House Party’s John Witherspoon) and the clueless, venal posturing from a triumvirate of white Hollywood exec types, who demand “more blackness” from the hopeful actors. Most touchingly, he also faces opposition from his loving Grandmother, whom he lives with in a settled family unit. His Grandmother wants him to make it, but is astute to the self-sacrifice (and potential self-abasement) that comes with throwing oneself into offensive, racially stereotyped roles. When Taylor claims, “(at least) It’s work!”, she counters with “There’s work at the post office”.

The film’s premise is simple but the form is daring and complex; in one scene, Taylor is being lectured by a hypocritical fellow actor on the dangers of selling out and ‘Uncle Tomism’. A troubled Taylor beings to daydream a parody of 70s exploitation film Mandingo, in which he pops up as a distressed butler named Jasper.  Without warning, this film-within-a-film segues into a commercial starring Taylor (now with a bizarre English accent) advertising ‘Hollywood’s First Black Acting School’ (taught, of course, by white coaches) and offering classes such as Jive Talk 100 and Shuffling 200. The scene is funny – its supposed to be – but it is also telling.

Genre parodies are rife in Hollywood Shuffle, but this is no Scary Movie (despite the involvement of the Wayans Bros) 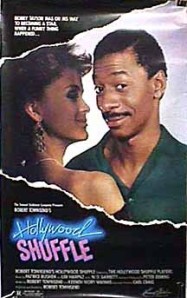 – every parody here serves to skewer stereotypes, highlight Hollywood’s racial hypocrisy and educate on the recent history of black cinema. The hoary old detective story is given a fresh spin in another film-within-a-film Death of a Breakdancer, which tells the story of Detective Sam Ace’s attempts to track down master criminal Jheri Curl. Ace (also played by Townsend), despite the humorous tone of the parody, is a rounded character; he is allowed to fight (not kill), fuck (not rape), solve crimes (not commit them), be articulate (not a jive turkey). Having watched the film on TV, Taylor remarks to his girlfiend, “That’s the kind of role I want”, drawing into sharp focus the one-dimensionality of the roles he repeatedly goes for.

Blaxploitation, the moneyspinning 1970s genre in which black sexual potency was key, is also challenged by Townsend. In a blink-and-you’ll-miss-it shot, the screenplay for the hopeless Afros vs. Mexicans film that Taylor successfully auditions for bears the preposterous name of Mandrill Man Vacuum – an obscure yet arch riff on Melvin Van Peebles, director of Sweet Sweetback’s Baadasssss Song

Townsend also offers a moment of pure horror, in which the execs repeatedly demand an “Eddie Murphy type” while the camera pans across a row of bare-necked, leather-jacketed black actors (some of the lighter-skinned actors are blacked up) giving it their best Murphy-style shit-eating grin; the message – if you don’t want to be a crim or a pimp, then ape the one guy that made it. The shot settles on Taylor who, against his will, as though possessed, convulses into a wave of Murphy-esque ‘he-he-he’s. A star Murphy may have been, but he didn’t have it all his own way in Hollywood either. Consider the lengths to which the makers of Beverly Hills Cop went to ensure he didn’t sexually engage with co-star Lisa Eilbacher. His only relationship in that film is a pseudo-homosexual one with his murdered friend. Ergo, Hollywood was happy for Murphy to be funny, but he wasn’t going to touch their women.

Hollywood Shuffle, despite its breezy, funny exterior is also complex, challenging and disturbing; in its lazer-sharp evocation of the world of personal compromise and Hobson’s Choice faced by black actors, it reveals a multitude of uncomfortable truths barely hidden by the successes of the likes of Richard Pryor and the aforementioned Murphy in the 1980s. At a shade over 80mins, Hollywood Shuffle is one of the finest films of the 1980s, and though the proliferation of online shopping has made it a less bitter pill to swallow, it is alarming that a film of this insight and quality remains unavailable for purchase in the UK.