Capturing childhood on film convincingly and with authenticity, as anyone who has struggled through the travails of Eastenders’ Ben will know, is an onerous task.  But it can be done.  Recently, I saw Jemima and Johnny (made in 1966 – eight years after race riots tore apart the film’s Notting Hill setting) at BFI Southbank as part of its Projecting the Archive strand. Directed by South African Lionel Ngakane (an ANC member, exiled to London from his native home) and about half an hour in length, the film is startlingly simple. Johnny, the son of a right-wing father seen demonstrating against immigration, and Jemima, daughter of a recent West Indian immigrant family, strike up an instant friendship which symbolically flies in the face of bigotry and de facto segregation. 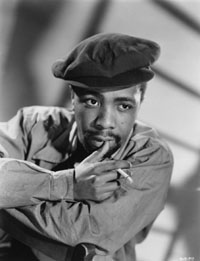 On paper, this could all seem a bit simplistic. The clear-eyed hope for a colour-blind society is touching, yet also slightly dispiriting in the light of the subsequent unrealization of this utopian ideal (although if Election Day 2010 taught us anything, it was that there remains great peril associated with immigration). The sentiment is laudable, but where the film really impacts is in its presentation of childhood.

In a virtually wordless sequence of events, the brand-new friends totter around their urban environs hand-in-hand; Johnny sure of his surroundings and bounding with almost reckless abandon, Jemima initially shy and reticent yet gradually increasing in confidence. Whenever Jemima falls behind, Johnny makes it imperative to come to her aid and pick her up.   It is childhood as its most elemental; the pair’s open faces, wide eyes, slightly awkward movements and nerveless determination to overcome even the tiniest obstacles are unbelievably naturalistic and moving in their unaffected presentation.

I remember my first day at secondary school well.  Our teacher was Scottish, like my Granddad so, with a big smile on my face I spoke out and made some comment in a Scottish accent.  No reaction. They must not have heard me!  So I did it again.  Neither the comment nor the accent were especially funny, but the frosty, cold-eyed response I received from most of my new classmates made me aware, at 11 years of age, that big school was going to be very different. Long gone in a heartbeat were the days of unselfconsciousness.

Jemima and Johnny absolutely transported me back to a time before you had to put your guard up and worry about what other people thought; a time when you could go to the playground, make a new friend, run around, play and then maybe never even see them again.  But it didn’t matter, because you didn’t have a care in the world. You would make a new friend next week.

Jemima and Johnny is childhood on film, almost dreamlike in its clarity.  It is a beautiful piece of art. I’m choking up again just thinking about it…

2 thoughts on “The last film that made me cry was…”