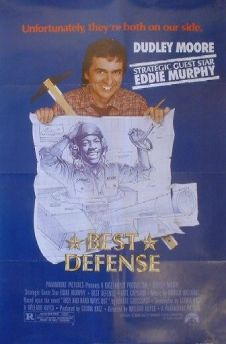 Where to begin with 1984 ‘comedy’ Best Defense?  A film so monstrously ill-conceived and misshapen that John Merrick himself has been spotted studying it intently on his iPod to make himself feel better. We could start with the poster (left), which sets the tone by choosing ‘Unfortunately’ as it first word. We could start by asking why you’ve never heard of it before. But I think we’d better begin by issuing a solemn warning: AVOID THIS FILM AT ALL COSTS.

The plot, such as it is, concerns an engineer (played by a visibly disaffected, and possibly drunk, Dudley Moore) and his shambolic attempts to perfect the crucial on-board gyroscope for the new XM-10 Annihilator tank.  WHAT DO YOU MEAN YOU’RE NOT INTERESTED?!

When test screenings of the film fell disastrously flat, the producers hit upon the idea of spicing up the action by drafting in Eddie Murphy – box office gold at the time – as a ‘strategic guest star’ (look – it says so on the poster).  Whether this billing was a witty allusion to the film’s military theme, or a dreadful error by a work experience lackey is immaterial. The bizarre insertion of a wildly over-the-top Murphy (who does little other than shout very loudly whilst inside a tank) renders an already convoluted plot totally incomprehensible, and the end-result is so bombastic, confusing and fundamentally unfunny that you’ll feel like you need a lie-down afterwards.

As pointed out by Time Out, the only thing (other than being terrible) that Best Defense is notable for is the “jaw-dropping plot development that has Iraq invading Kuwait, six years before Saddam did it for real”.

Brilliantly, when asked why he accepted the Best Defense challenge (he and Moore never share a second of screen time), Murphy is reported to have said “The door opened and four guys came in carrying a cheque”.

Such candid honesty is said to have attracted Mel B to Murphy in the first place.

For the best place to see Murphy in full-flow, check out the clip below; a genuinely frightening condensation of 1988 comedy Coming To America into a nightmare mash-up of Arsenio Hall-baiting, hypnotic repetition and disorienting wipes. Kudos to the troubled soul who took time out to put this little lot together…